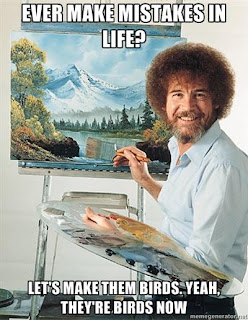 If you're on facebook or twitter, you may have seen the image to the right.  When I first saw it, I thought immediately of an artist friend of mine and her work with elementary school children.  Natalie would spread out large sheets of paper and an array of vibrant paints upon the floor, and the children would gather eagerly to work with them.  While classical music played softly, she and the children would paint--sometimes elephants, zebras, and giraffes, other times houses, balloons, clouds, and sky. Whatever they painted, they threw themselves into it, and I marveled at their energy.
But then one little boy made a mistake.  His nose wrinkled and his lip trembled.  He looked up apologetically.

"I messed up."  He pointed to a blotch of purple paint.  Natalie nodded.

"That's no problem."  Natalie picked up a clean brush. "We just learn to work with our mistakes."  As we watched, she took the brush and flicked it through the paint.  With her shaping, the blotch became a sphere, the sphere became the center of a ring, and soon we were all standing over her, watching a blotchy, purple Saturn whirl into the center of the child's painting.

"Now you try," Nat said, and dumped a blob of red paint on another piece of paper.  She picked up a clean brush and handed it to the boy.  "See what you can make out of it."